The tower defense genre is always open and in need for innovation. There are many subgenres of tower defense, but there are always limitations as to how far you can bend the formula without breaking it.

In MACE you find a classic tower defense game that operates around an in-game shop like so many other games do.  There are unique towers and enemies and MACE manages to also incorporate special store items (bombs and the like).  New maps and items are unlocked via coins for the shop and defeating bosses.

Placing mines is a great added gameplay element as well.  In addition to managing where towers are placed and how they are upgraded, you can place mines for enemies to stumble over.  The towers can also be directed in a certain direction and pathways can be blocked so you have more control over how the game operates.

The game takes place in the future on Earth after an alien invasion.  Basically it’s the old story of everyone uniting to take on space baddies.

MACE represents the human fighting force to repel the invaders.  The goal is to prevent the alients for having a place to land their ships.

The eight towers in the game can each be upgraded twice.  Additionally, the pathway placed items (like mines) can be used to repel the enemy.  New levels become unlocked as you go along. There is also a freeplay mode for people who like the whole ‘endless waves’ play style.  The tower control mode lets you take control over what the tower is targeting and the direction it fires, which is a nice gameplay element not seen in other games.

Each tower can be upraded which affects the damage, fire rate, and range of the tower.

Things you can place on the paths include mines, electric fields, and blocks.

There are also specials that you can use in the game such as bombs, air raids, atomic bombs, and an element to increase the rate that you gain money. 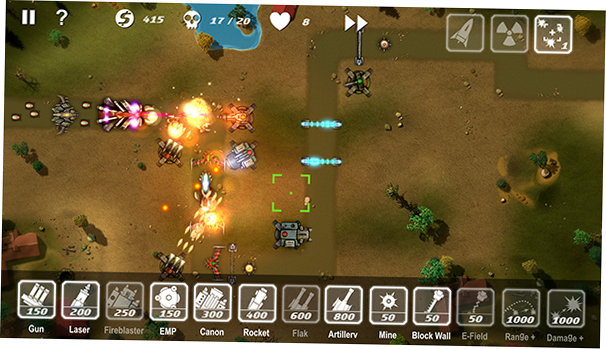 Gamestates are even saved on the cloud, which means that you can play across multiple devices without having to start a fresh game on each one.  The cloud gamestate transfers your save game from one device to another.
Preventing an alien invasion is no easy task.  Upgrades are the most important part of the game, and this game will make you upgrade faster than you know you will realistically be able to.  Each level only starts with $300, so you will have to use it wisely.  That’s really only enough to build two new towers.  Crucially, not losing lives means you will have more gold to use each level.

Not to mention that when each level begins you are limited to only being able to place towers along the side of the road that the enemies travel down.

The enemies in this game are great, but it is kind’ve funny to see some of these sleek alien ships crawling along slowly wherein they used to fly agilely through space.  But that being said, this IS a  tower defense game.
The best aspect of the game overall is that normal frustration you get in a tower defense game seems to have been addressed really well.  You know the one- where you have towers that are firing AT THE WRONG enemy.  To help mitigate this, the game allows you to command the tower yourself when this happens to make sure that you actually hit everyone.  It’s a great idea for the genre as a whole.

Game tips are provided during loading screens, so be sure not to tune out too much while each level loads.

Overall, this is a great game worth trying out.  The only thing I wish they would add is the ability to speed time up more.  There is the option to double the pace, but sometimes it still seems like you are waiting forever even with this fast forward mode on.